Sarah is an awesome person. She is highly intelligent, funny as hell, and sharp as a tack (as the old saying goes.) Her quit wit has had me in stitches more times then I count, she truly is a great person. She is the friend that will send a message just to say hi, ask if you’re okay, and ask if there is anything that she can do to help in anyway at all if something is off. The thing is, she honestly means it when she asks. She is a genuine person, with an endless amount of compassion and empathy for people that she doesn’t even know. She is real. She is beautiful. She is my friend. Thank you Sarah, for all that you do to spread awareness, encourage others, live well yourself, and for being my friend. You are wonderful, the world needs more people like you in it!

Things Do Get Better if You’re Open To Change

I have suffered from depression and anxiety my entire adult life and most of that time I was clueless of what was wrong with me. So whenever I ended up in a depressive state I would beat myself up for being a whiny little bitch, a weakling, a waste of space. The only thing that got me through those times was just shear stubbornness of not giving up, and boy did I ever think about giving up. Every morning was a new day that I had to muscle through. Eventually the clouds would lift and I could carry on with my life until the clouds rolled through again. It took years to understand what was going on with me. All my doctor ever did for me was toss me pills, slapped a label of depression on my forehead and sent me on my merry way.

The light bulb started to come on when I started seeing this chick on TV talking about mental illness and the stigma associated with it and Bell Media whom she was a spokes person for started doing all these initiatives to get the conversation going. That chick was Clara Hughes. I would see her on TV during the Vancouver Olympics hype, the chick that got the honour to carry the Canadian flag, commentators telling me she won a bunch of medals in both speed skating and cycling. But it was her work with Bell that got me starting to pay attention to her and her message. As I was hearing more stories from other people I was hearing a lot of similarities between them and myself. I was starting to get a better idea of what was really wrong with me. So when the clouds rolled in once again I decided to get some real help this time.

So I started getting therapy, and with some reluctance went back on antidepressants. Then when I started travelling the spider web of social media connections, through Clara Hughes I eventually discovered Stigma Fighters and an incredible community of other mental health sufferers and their blogs. After several months of reading other peoples stories I felt inspired to write my own. That was a big deal for me to put myself out there, to tell everyone around me what kind of shit I’ve been going through. But I received nothing but positive feedback from it. I discovered that many family members are also suffering (not exactly a heart to heart type of family). Friends started messaging me on Facebook that they have also been diagnosed with various mental illnesses. I even shared the post with a couple of people at work and one of them told me that he has also been struggling with shit. So it was a new kind of bond between us.

Through Stigma Fighters I have made new friends, and have a new community, an extension to my support system. This group of people are such strong, ambitious, and caring individuals. They share so much of themselves to us, they share some of their darkest experiences to let others know that they are not alone. For this I am eternally grateful that they exist and if a website could have arms I know it would be hugging me and lifting me up from the ground when I can’t get up on my own.

So if you yourself are suffering know this, you are not alone, there are people out there that get you. You don’t have to share your story but you do need to open yourself up to change. It is a tough road but it is a better road to travel than the one where you hide in secrecy and suffer alone. That road won’t have a very good outcome for you. The road that you take where you ask for help and no longer hide means you have strength, it means that even though things are fucked up for you right now you will still find the strength to get up each day and face the day without giving up. Because if you do get to the point that you do want to give up you will have people in your corner that knows what your struggling with and will be there for you. Things get better when you’re open to change. 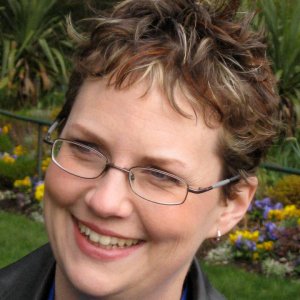 Sarah Sorensen is a 41 year old living in Victoria, BC. She is a UI/UX designer for a green tech company, and is amazed that they pay her to make pretty buttons and icons all day long. She has been married for 7 years and counting, no kids but plenty of fur babies to compensate. She likes to bike, exploring all the trails that the South Island has to offer. When she isn’t biking she is either hiking or binge watching Netflix while she plays video games. (Yes I do both at once). You can connect with her on Twitter. You can read Sara’s Stigma Fighter’s essay here: Stigma Fighters Canada

Poetry and prose by Basilike Pappa